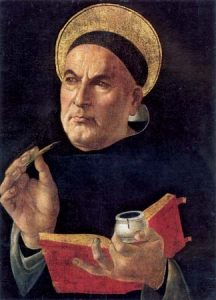 However, still further in, F&B allow that “some traditional natural law theorists think” that we can’t “inflict a punishment merely to secure retributive justice,” and they go on to offer some citations from Aquinas (57).  It was only on my second read that I realized F&B are saying that Aquinas disagrees with them about punishment.  Perhaps one reason it was not clear to me at first is that they do not cite Aquinas’s clearest statement on the point:  “Vengeance is lawful and virtuous so far as it tends to the prevention of evil” (ST II-II 108.2).

Why this difference in conclusion?

It is bound up, as I say, with the different approaches to the subject.  While F&B cite Aquinas along the way as supporting this or that step in their argument for the moral goodness of punishment, Aquinas himself never argues the way they do.  As a result, while Aquinas does say that capital punishment is an act of justice, when he specifically asks whether capital punishment is morally legitimate he always answers in terms of how it prevents further damage from being done to society.

But Feser and Bessette began by saying they represent the natural law approach taken by Aquinas and JPII (page 21).  Why does F&B’s approach differ from Aquinas’s so as to lead to such a different conclusion?  I think it is because F&B omit some things from their consideration, things that would change the meaning of certain premises in their argument.  In the next several posts, I want to explore these omissions.