When my family walked into Church today, the crucifix and the statues were covered with purple cloths.  Fr. Dave told us that we had entered a time of looking forward to Holy Week, and he called up the candidates for baptism for a brief exorcism and a series of prayers.  Where does this special season come from?  What does it mean? 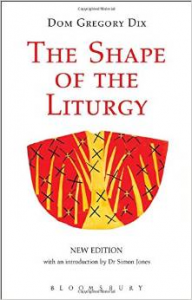 I am not a historian, but recently I have been reading about the history of the liturgical year.  Dom Gregory Dix has an amazing chapter on this history in his book The Shape of the Liturgy, and Dom Gueranger’s The Liturgical Year has an interesting historical introduction to the season.  It turns out that the key to understanding Passiontide and Holy Week is baptism.  But to see that, we have to look at where the season first came from.

In the very earliest Church, when the apostles or their immediate disciples shepherded Christ’s flock, there was no “liturgical year” as such.  The seasons we know took final shape much later in the fourth century.  In the apostolic age, there were only two elements in the Christian year:

Easter in the apostolic age was subtly different from the way we think about Easter now.  Liturgies in the Church, including every sacrament, have always had three meanings:

Our Easter celebration today emphasizes all three, very strongly.  But in the earliest days, the emphasis fell on numbers 2 and 3; number 1, the past historical fact of Jesus’ death and resurrection, did not receive the same attention as a past historical fact.  For example, there was no Good Friday celebration in which the death of Christ is commemorated apart from his resurrection.  Instead, recognizing that our salvation comes from what Christ did, the emphasis fell on how Christians in the present moment were transformed by grace and on how they would enter into God’s kingdom in the future.

Fitting right into this emphasis, Easter was the day when people were baptized.  The vigil the night before was a time of waiting for the baptismal grace with prayers and readings, and at dawn on Easter Sunday the bishop would baptize the candidates and give them an exhortation, and then the newly baptized would celebrate their first Eucharist with the entire congregation.  Scholars often refer to The Apostolic Tradition by Hippolytus for a description of what happened.

To get into the spirit of the thing, try this experiment.  Imagine you are a gentile convert to Christianity in the waning days of the first century.  After a long period of waiting and scrutiny, you have stayed up all night listening to Scripture and praying for transformation in Christ.  At dawn you were baptized by the bishop, and now he is giving you an exhortation.  OK, now read the First Letter of Peter and imagine that as the bishop’s voice speaking to you.  Some people have supposed that 1Peter is a post-baptismal exhortation, but at any rate the themes in that letter are reflected in a lot of post-baptismal Easter homilies from the earliest centuries of the Church.

So what about Passiontide?  Well, that was a period of preparation for baptism.  Catechumens went through two or three years of waiting and scrutiny, during which they were taught little or nothing about the doctrines of the faith or the liturgies of the Church.  In the weeks leading up to Easter, the time for their baptism, they finally received doctrinal instruction.  In the last two weeks or so before Easter, they fasted and received more frequent instruction along with daily exorcisms, and in the final week leading up to Easter they would at last be given the Apostles’ Creed.  They fasted for the two days leading up to Easter, and capped off their preparation with the all-night vigil the night before.

That period of more intense preparation for baptism was the seed of our Passiontide, and in fact the seed of the entire season of Lent.  Eventually the entire congregation not only celebrated their baptismal transformation on Easter with the newly baptized but also prepared for that day along with the candidates for baptism.  The fast was extended back, and everyone was invited to attend the catecheses.

Now that the liturgical year has more historical emphasis, we have readings that look to what happened, historically, in the final weeks before Christ died.  But the key to understanding much about the season remains that it originated as a season of preparation for baptism–for re-birth in Christ.

What connections have you seen between Holy Week and baptism?  Let me know in the comments!