Why is this scene so important, so pivotal, that this and no other is “the beginning of the gospel”?  Mark gives us seven clues: 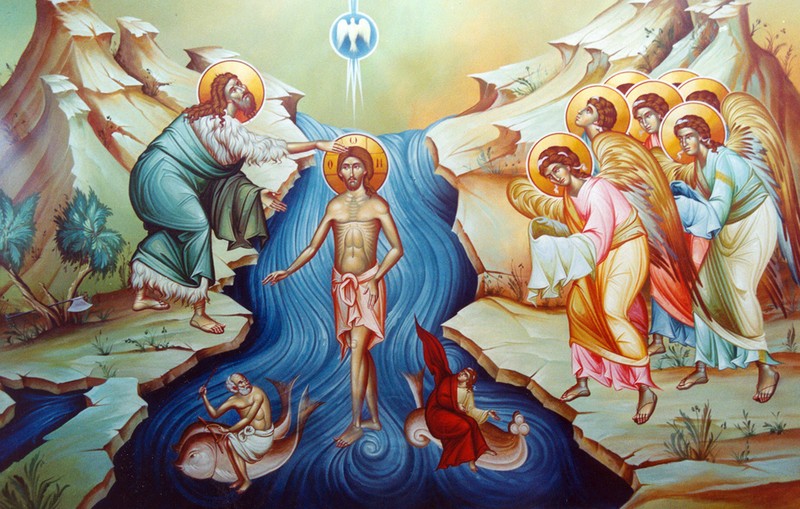 In Mark’s version of the story, Jesus heads from Galilee down to Judea to be baptized and then, after a sojourn in the wilderness, returns to Galilee.  From that point on, he stays in the north, moving all around the Sea of Galilee, going far north to Tyre and Sidon, coming a bit south to the Decapolis, but always staying basically in the north.  The next time he comes from Galilee to Judea is for his passion.  So Jesus’ geographical movements seem to suggest that there is a parallel between the baptism and the passion.

Mark opens his story by introducing John the Baptist, and he does so by first citing a text from the prophet Malachi about the “messenger” whom God will send before his face.  In context, this “messenger” is later identified in Malachi as Elijah.

If we follow up on the geographical clue by comparing the baptism to the passion, we find that Elijah comes up just before Jesus dies.  When Jesus cries out, “Eloi, Eloi, lama sabachthani?” then bystanders begin to speculate about whether he is calling for Elijah to come take him down from the cross.  But we the audience of Mark’s Gospel already know that, just as the Christ came to die, so did Elijah.

Immediately after Jesus dies, the curtain in the temple is torn in half, opening the way into the place of God’s presence.  The Greek verb used there for “tear” only occurs one other place in Mark’s Gospel, namely at the baptism scene, where immediately after Jesus is baptized the heavens are “torn open,” thus opening a path to God’s dwelling.  Yet again, Mark seems anxious that we compare the baptism with the passion.

In the passion scene, after Jesus dies and the temple curtain is torn open, the centurion standing in front of Jesus says, “Truly this man was the son of God!”  It would be hard to miss the connection with the voice from heaven in chapter 1, “This is my beloved son.”  The one who sees into the passion with enlightened eyes, Mark suggests, will learn the same thing he would have learned had he seen the baptism of Jesus.

Mark does not offer us an explicit account of why Jesus goes to be baptized.  Matthew offers us a dialogue between Jesus and John in which John points out the obvious:  Jesus has no need of a baptism of repentance.

If we take the same idea as implicit in Mark, then we have another connection to the passion.  In the baptism, one who was not guilty came to repent in our place, stepping into the role that properly belonged to us sinners.  In the passion, the innocent Jesus is executed as a criminal, taking the place of those who have really committed crimes.

Mark dramatizes the point with Barabbas, a man guilty of insurrection against the Romans.  Jesus is falsely accused of being the “King of the Jews” in the sense of one who plans to lead an insurrection against the Romans, and he is executed in Barabbas’ place.  It seems to me that Barabbas, whose name means “son of the father,” is a sign of every Christian ransomed by the one who came “to give his life as a ransom for many” (Mark 10:45).

By now, I hope you are convinced that Mark opens with the baptism scene because he wants us to see parallels to the passion.  But why are these parallels so important to him?

When Mark says by the lips of John the Baptist the Jesus will baptize in the Holy Spirit, does he have in mind some future scene like Pentecost?  Is this an allusion to the rest of the story, the part that comes after his gospel?  Or does he introduce the baptism scene with this sentence because he wants us to see that Jesus does in fact baptize with the Holy Spirit within the confines of this story?

Given everything we have seen to this point, I would suggest that we look back to the passion scene.  In Mark 15:37 we read that “Jesus uttered a loud cry, and breathed his last.”  Something was very striking about this final act, this loud death cry:  “And when the centurion . . . saw that he thus breathed his last, he said, ‘Truly this man was the Son of God!’”  This moment reveals Christ’s true identity as the Son of God.  Why?

Of course, it is strange and even miraculous that a man spending his last drop of strength would be able to cry out loudly.  That alone would arrest a soldier’s attention.  But Mark gives us one other clue:  the verb for “breathed his last” is ek-pneo, or literally, “spirit out.”  The Spirit, the pneuma, descended on Jesus at his baptism; now he “spirits out,” or “out-Spirits,” in his final act.

There is a seventh and final clue as to why Mark wanted to begin his gospel with the scene of the baptism, a clue that my students routinely find when I teach Mark’s Gospel.  But now that I think of it, before I dive into this final clue I should talk about the very strange way Mark ends his gospel.