After my recent post about the death penalty, I bought the new book by Edward Feser and Joseph M. Bessette, By Man Shall His Blood Be Shed.  They offer a veritable encyclopedia on the issue, taking up all manner of objections and citing all manner of sources.  Over the next few posts, I would like to offer my reactions to at least the first part of their work.

To start with, their strongest point: the theological argument of chapter 2 is imposing.  Citing not only sources but even critics of the death penalty, Feser and Bessette bring out the following: 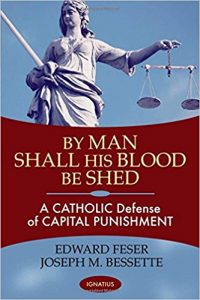 What’s more, this consensus was not an unconscious acquiescence in the prevailing culture. A consensus in tradition carries no force if it is not rooted in the faith and in the Christians actual judgment about whether a given action conforms to the faith.  For example, while the Church Fathers speak as though the earth were at the center of the universe, this is not due to their convictions about what is compatible with faith but due to the fact that they had no other view available to them about the physical world. They spoke that way by default, not not by a judgment of the alternatives.

One would be hard pressed to find a moral judgment held by the Christian tradition more consistently and more consciously over the ages. For a Catholic, opposing the death penalty as inherently illegitimate not only raises the questions inherent to this issue but also the further question:  What would it take for us to feel bound by the witness of tradition regarding a moral question?  What is lacking in this case, that we do not feel so bound?

One could, of course, develop that tradition forward.  Perhaps there is a condition for the morality of the death penalty that was so constantly present in previous ages as to be overlooked in Christians’ reflections.  Perhaps the sudden absence of that condition today would result in a new prudential judgment and a new precision in reasoning about the death penalty.  But that would not amount to saying that, in fact, the consensus of every Christian era has been wrong and must now be repented.