For most Catholics, Holy Saturday is a kind of blank.  Since there is no liturgy for Saturday itself, we don’t hear homilies explaining it.  Good Friday drives home the passion, and Easter booms with the resurrection, but Holy Saturday has no one to preach it.

Since the “Author of life” who was killed is the same “living one [who has] risen”, the divine person of the Son of God necessarily continued to possess his human soul and body, separated from each other by death:

By the fact that at Christ’s death his soul was separated from his flesh, his one person is not itself divided into two persons; for the human body and soul of Christ have existed in the same way from the beginning of his earthly existence, in the divine person of the Word; and in death, although separated from each other, both remained with one and the same person of the Word.

To put that in plain English, we all know that when we walk by Grandpa’s casket, the corpse in the casket is not Grandpa anymore—not really.  But when Joseph of Arimathea laid Jesus’ corpse in the tomb, that corpse was not a man but it was still Jesus—really and truly. 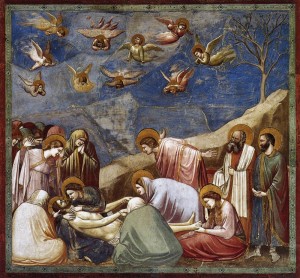 [This is the part where I get all technical and metaphysical.  If this kind of thing makes you dizzy or nauseas, get a glass of water and sit down for a while.  Or you can skip this part altogether.]

All the rest of us became persons by the fact that our soul and body united to begin our existence.  Our souls were created for our bodies, and our bodies received existence through our souls.  So when soul and body come apart at death, our souls continue to exist but only as parts of a human person, while the body loses its original existence and turns into something else altogether.  We revere the human body because of its past tie to the human being and because of its future hope of resurrection, but we realize that for the present it has become a mere lump of matter.

With Christ, the situation was different.  His divine person existed before his human nature was created, so the union of soul and body in Christ did not begin his existence as a person.  Conversely, the separation of soul and body did not cause the dissolution of his person.  You can’t have a man without soul and body together, so of course the body alone was not a man.  But when the soul and body separated, that which gave personhood to both soul and body continued on and was not forced apart from either of them.

One take-away for Christians is this:  when you venerate a crucifix or an icon of the dead Christ, you are venerating an image of God.  We do not kiss the crucifix on Good Friday to honor what used to be Jesus, but to honor Jesus himself in the sleep of death.  God really did stay in the tomb, even as he descended into hell.

A second take-away is this:  for a brief while, God humiliated himself to the point of being incarnate in irrational matter.  It seems unthinkable that God would have come down to this earth as a rock or a mineral, and yet for a short time he allowed himself—his very person—to be a corpse, i.e., a complex form of dirt.  That adds new sting to Paul’s phrase about Christ humbling himself “even to death.”

Of course, God was at the same time united in person to a human soul, but that will need its own post.