When you enter a Catholic church in Passiontide, what leaps out at you is that all the statues and religious images are veiled in purple cloths.  When the veiling of images began in the tenth century, it was part of something even more striking:  a large veil completely separated the main altar from the rest of the church.

This became the custom throughout Europe in the Middle Ages. It is still the custom in some parts of Austria and Germany, where the huge veil is known as the fastentuch, the “fasting cloth.” 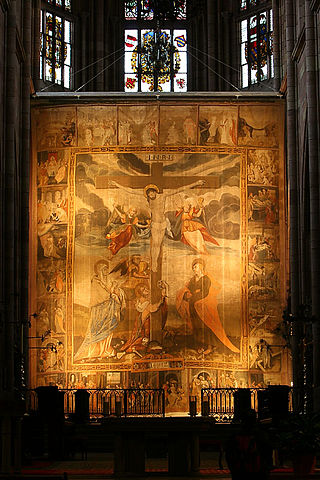 According to James Monti, the twelfth-century French liturgist Honorius of Autun compares the Lenten curtain to the Temple veil that divided Holy Place and the Holy of Holies.  The big curtain and the little veils were typically removed in connection with the reading of Luke 23:45, “The veil of the temple was rent.”

The original veils were bare, but later Fastentuchen featured biblical scenes for the people to contemplate during the canon of the Mass.  At that point, the people neither saw nor heard the priest!  Because they are so big, the individual scenes on a Fastentuch are like full paintings in themselves.

This article at New Liturgical Movement has more images and some nice historical background.