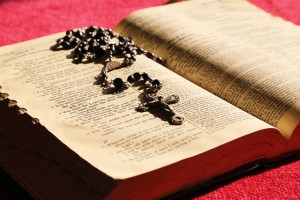 A good teacher never just answers the question, but asks more questions to find out what was behind the question. As it turned out, this student was inspired by my recent lecture, by the earlier lecture by Tim Gray, and by a chance exchange with another professor—inspired, he said, to read the Bible as addressed personally to him. In other words, he had begun to practice lectio divina.

He picked Hosea because he had never read it before and—well, things started happening. He went to the chapel for adoration, and couldn’t find his Bible. He asked around for an RSV, because that was what he had always used, but no one had an RSV; he looked in the school library, but the library copy was gone; finally, he knocked at the door of a theology prof who handed him the Jerusalem Bible: “Here, you should use this. It has good footnotes.”

By golly, the footnotes were helpful! What a great lectio divina session! He left the chapel, returned the Jerusalem Bible to the prof, and immediately met a freshman coming down the stairs. “Hey,” said the freshman, “did you know there’s a Jerusalem Bible on the freebie shelf upstairs?”

And of course this senior had the universal experience of those who read Scripture devotionally, namely that the randomly chosen passage of the day seems very often to zoom in on exactly what he needed to hear right then.

As he told me all this, I was really, really glad I had decided to renew my efforts at lectio divina for Lent. Without guilt, I could tell him that it’s true, every Catholic should do it. And it’s true, these things happen!

Last Wednesday I got just far enough into my lectio divina to reap some fruit but then was cut off in the middle of a passage. Thursday—the evening before my conversation with the senior—I didn’t want to go to bed without at least doing a token reading, so I decided I would just read a verse or two and be done. I picked up at that random spot in the middle of a passage, and Zounds!

The next verse spoke directly to the difficulty I had been turning over in my mind for the last fifteen minutes! It turns out that when you listen to God, you talk to him and he talks to you. You lift up your concerns to him, and he opens his word to you.

“It works that way in every other conversation,” the student admitted. “I don’t know why I didn’t think it would work that way with God.”