Today, my freshmen and I will discuss the end of the book of Deuteronomy, where Moses ascends the mountain to look out over the Promised Land–and die.  That scene moves me mysteriously.

At one point, in a particular situation, I wrote a story based on that scene.  It is a strange story, a difficult story, and I am not even sure it is a good story, but every time I go back to it I am moved again and I can’t quite bring myself to chuck it.  With some trepidation, I now post it where anyone can see what flights of fancy erupt where a man with too little learning to match his love seizes access to a keyboard. 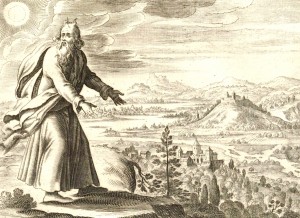 Deuteronomy 34:10, “And there has not arisen a prophet since in Israel like Moses, whom the LORD knew face to face.”

Colossians 2:17, “These are only a shadow of what is to come; but the substance belongs to Christ.”

James 1:17, “Every good endowment and every perfect gift is from above, coming down from the Father of lights with whom there is no variation or shadow due to change.”

Before you take up and read, look at the picture above this story. There you see me, the author of this story: my hands point to a well-watered land, dark woods and verdant pastures, and to the city on a hill overlooking all; my eyes look back to invite all those behind to enter and take this land. Look closely at my eyes: see how they plead, see how earnest and how sad they are. You behold me.

Forever do I stretch out my hands, and never will I cease. Although my bent knees and backward glance suggest action, I never straighten my legs or turn my head. In fact, for me there is neither moment before nor moment after, and so no memory of the sort that you enjoy: I am fixed in a single moment, in a single feeling, which is yet not like your feelings colored by consciousness of yourself feeling, which depends on awareness of time passing. I am a drawing, and so there is only one moment in my world, one now. I have only a glint of the rich being of your world.

If all this is so, you may ask, who is the author of this story? Surely writing word after word implies an unfolding of thought, and a succession of action. A frozen figure cannot move from line to line and from word to word, still as he is in the immobility of one gaze and one thought.

You are right, and yet I am the author of this story. How that came to pass is my story.

A moment passed, the first moment of my life. I stood in a stupor, like one who wakes from a dark and dreamless sleep to find himself standing erect under the noonday sun. Infants and children live as in a dream, but the passage from infancy to animal cunning to reason unfolds gradually, as the light before the dawn leads to sunrise; I leapt from sleep to full awakening in an instant, and the terror of that moment cannot be expressed. To the very young, a single day may seem a year, while to the very old even a year may pass as a day; entirely without age or past, I experienced that first moment as though it were eighty years.

I stood in a broad and spacious room, the walls decorated with paintings and pen drawings and pencil drawings of every manner of thing: there were landscapes of sea and sky, mountain and plain, forest and flower; fish and birds and land animals of every description peered out of the decorated frames; and portraits of famous heroes joined the rest. Here and there throughout the room moved onlookers in a variety of garb, staring first at one painting and then the next with astonishment.

A corpulent man beside me touched my arm. White and black robes flowed over his massive figure, and his eyes, dark brown, were so intense as almost to be black. His voice when he spoke was deep: “Look there.” The massiveness of his hand was absorbing, as though he were thicker and more real than everything else in the room.

Reluctantly, my eyes turned to a drawing the wall. Dimly familiar, it showed a valley, and several waters, and many trees—recognition came with a shock, doubly so because this was my first experience of recognition. “I belong there,” I stammered at last, “That is my world.” The big man waited. “But look at how flat it is!” I went on. “There are trees and rivers and buildings, but the trees only differ from the buildings by a bit of coloring! And this tree here is just like that tree there, except that it is of painted on this bit of canvas instead of that. My world is not—I am entirely unreal!” Here words failed me.

Here his voice lowered, if that were possible, as though about to share a secret. “But you are wrong when you say that your world is entirely unreal. A painted world has a certain kind of reality, inasmuch as it can be seen by others. In fact, for a painted world, to be is to be visible.” His eyes threatened to bore through me: “I say it again: in your world, to be is to be visible.” And I saw that he was right: if there were no light in the world to brighten the painting, it would not be even a painting; but when the light fell on it, it sprang before the eye as at least a real reflection.

This comforted me momentarily, but, as my gaze turned from my painted world to my new teacher, I saw again men and women of every description staring in fascination at one painting and then another. “How real they are!” I observed, “How thick and substantial! They move about, they remember and compare.” But the scene began to look strange: “If I were real as they are, I would delight in nothing more than contemplating the real around me. Why do they look only at the paintings and never at one another?”

My guide took me by the arm as he dismissed the room with a wave. “They think that the law of your world is the law of their world: they think that, even for them, to be is to be visible to eyes.”

What followed then was such as death must feel within your world. For I was rent, I was changed; I could not see as you see round you, nor could any eye as yours see me. It was as though I had awoken. No grammar captures what I knew, because there was no silence flowing on which by our speech was broken; there was not ever he-was-speaking, only he-had-spoken; no time within our repartee, but now—then now—then now—then now, like points in separate planes.

Put into words, what my companion said would be, “Look back.” My obedience was not a turning of the head but sight, a view; and I knew the room which we had left. But from outside that world and looking back, I now could see behind and in front of it, and I saw that your world is like to mine. As a man is a man in my world because of an arrangement of colors, so a man is a man in your world because of something like shape, which is yet not shape but more real than shape, although like it. And as this tree is this tree rather than that tree in my world because it is painted on this part of the canvass rather than on that part, so in your world this man is this man rather than that man because his shape is the shape of this stuff rather than of that; he is not on a canvass, but his shape—which is more real than shape—binds this together rather than binding that together.

In the same glance, I noticed that I saw all this of myself and not because my teacher explained it, because my vision was not of colors but of the very being of things. Just as the color in a painted man is lit up and so is visible, the shape and stuff of your world is “lit,” is held forth into being. My view was of the “lit” things, and just as canvass is colored and color is lit, so in your world stuff is shaped and shape is held forth.

All this and more I shared with my teacher, in the same act by which I saw it, together with my question: “They do not see this?”

“Shadows and reflections, with the eyes.”

Words will not that life with form endow;
Sequential speech, all time entangled, is unfit.
There was no now, and now, and now, and now,
But my gaze, and his, to which my depths submit,
A changeless being-grasped, a steady sight.
Ev’ry nook and nature of your world is “lit”;
This “Thou” above all being is the light.
As my world’s static pose to vibrant motion stands,
So your world’s flux to stable, changeless being bright;
While motion shade of color, varied hue demands,
In him there is no darkness; shadows from him flee.
No partial shadow life his brightness understands.
Light withdrawn, all paintings, just as paintings cease to be;
Him withdrawn, your world must perish, utterly.

On my descent back through your world and on to my own I will not dwell. Suffice to say that you see before you the result, this small story written in witness. One of your world would have been a more worthy messenger, it seems to me, and one from the world above worthier still, but my guide stated firmly that I was chosen precisely because my world is below yours. Perhaps my reader will understand?

For my part, I can only urge: You who have substance, look around you and see! How noble your world, how thick, how real—and yet how much more real is that which is real of itself. There is rest, there is warmth, there is light! He gave me to see what yours can be, but I shall not pass over.