In a recent essay over at The Stream titled “Cardinal George and the Denethor Option,” John Zmirak invokes Cardinal George’s example against all those who would flag in the culture war. “We cannot take comfort in the prospect of escape, of a “Benedict option” whereby we will hide from evil in tiny enclaves of fellow believers,” argues Zmirak. Setting this approach down as a tempting Gnosticism, he concludes that “In fact, I think that a better name for the separatist imperative is not the ‘Benedict’ but the ‘Denethor Option.’” 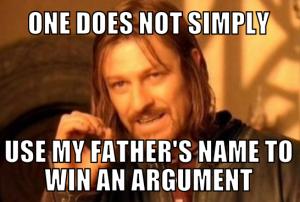 It’s a well-written piece of rhetoric and says a lot of true things. But when you stand back and realize that Zmirak has characterized the people he disagrees with as both Gnostic and suicidal, you might begin to wonder if his rhetoric has gotten off the leash on him.

If you read Zmirak’s piece and thought, “Exactly!” then let me suggest that you and Zmirak both subscribe to the “Boromir Option.” This take on the culture war can be summarized in three handy slogans:

It all depends on our strength. The folks back in the Shire, in their precious Catholic communities, have no idea how we have protected them for years from the onslaught of the enemy. There would be no Catholic communities if we had not been exercising our political clout while they squabbled among themselves. The only way to win this war is to fight it, meeting might with might. The first century Zealots and Sicarii were right: when Romans oppress you drive them out. We’re lucky the crucified Messiah thing worked out once, but we can’t count on it again.

It’s all about the war. As long as we’re in crisis, it is unrealistic to focus on anything but getting out of it. And it’s just selfish to get fussy about liturgies and canon law all such peace-time luxuries.   You want a Corpus Christi procession? Do something useful and rent a float in the St. Patrick’s Day Parade in New York. You homeschool because you want your kids to have this dreamy, wholesome childhood? Suck it up and send them to public school where they can witness—and don’t try to isolate them in a safe but self-absorbed Catholic private school, either. This is war, people.

The enemy has the strongest weapons, so use them. We got into this crisis by ignoring the enemy’s strengths, and we’ll get out of it by taking advantage of them. Popular music is what we’ll play at our gatherings, so we can attract the young people; movies run the culture, so we’ll make movies; the standard set of talking points that wins the day—“freedom from interference,” “tolerance,” “[fill in the current fashionable cause]”— these will be our main points as well. When you see that something works, it is madness not to use it.

Now, maybe you thought Zmirak’s piece was great, but you think I’m being unfair to him and to you. People who really adopt the “Boromir Option” are extremists and don’t represent you. There’s a lot more nuance in your position, you object.

Of course there is. And there is a lot more nuance in the “Benedict Option” than Zmirak lets on, too. The problem is that all of us tend to see our own view as nuanced and our opponents’ view as cut-and-dried, black-and-white; if our opponents turn out to be more complicated than we expected, we see them as being inconsistent, not nuanced. The reason is simply that we live in our own heads, where we see the nuance, and not in our opponents’ heads.

Grown-up conversation means getting past this. It involves getting out of your own head and seeing things from the other’s point of view. Folks like Zmirak can generate a lot of Internet traffic by holding heavy-handed, one-sided positions, but they benefit themselves at the expense of the common good. They cheapen public discourse.  It’s too bad, because Zmirak’s a great writer.

The genius of Tolkien’s tale is that he avoids lop-sided positions. Denethor is proven right, in a way: Gondor could never win in a fight against Sauron. But he is wrong to despair. Boromir is right that the Shire would have vanished long ago without Gondor’s military strength, but he is wrong to conclude that salvation will finally come from that strength. The Shire-folk are right that life is more about community and home than about war, but they are wrong to conclude that the war is none of their business. This is why it’s easy to pick a character out of The Lord of the Rings as an unflattering metaphor for positions you dislike.

Excellent post. I have long been a supporter of the Benedict option. I even considered a move to Clearcreek, but decided against it. I think rural hamlets and communities of faithful stand a better chance, but I also see that societal engagement is important.

One of my former students is at Clear Creek. I’ve wanted to visit for years, but have never made it out.

In the age of instant communication and rapid travel, it is not all that hard to live in a rural hamlet AND engage society. God offers solutions even as he allows problems.

Want to know how the Benedict Option is likely to work out in practice?

Or all eight parts of Grant Gallicho’s account of the Society of St. John/St. Gregory’s Academy scandal: https://www.commonwealmagazine.org/blog/curious-case-carlos-urrutigoity-i-updated .

Or how Urritigoity’s closest supporters went right on teaching kids with no consequences: http://www.candidworldreport.com/my-brush-with-the-sex-abuse-scandal.html.

Or read the accounts of how 2/3 of our bishops covered up for pedophiles. Why on earth should people trust the insular Catholic subculture any more than, say, the residents of Greenwich Village?

John, You seem fixated on the possibility of Catholics going weird or bad. What about the possibility of Catholics getting superficial, worldly, or utilitarian? That’s spiritually harmful, too, and yet more subtle. The principle abusus non tollit usum would seem to be highly necessary here. Yes, there are strange subcultures. But there are also healthy subcultures, and in a time when the general culture is materialistic, vicious, and ugly, it will take Catholics some serious rebuilding if we even want to see an alternative. By all means, let there be fighters who go to the front lines. But let there… Read more »

Hi John, thanks for stopping by my humble blog. When I saw your comment, I was stumped: Given that the sex abuse scandals were so widespread the past fifteen years, covering many different dioceses and religious orders of various stripes, why would anyone suppose that there was a special correlation with people inclined to the Benedict Option? It doesn’t make sense. In the end, I think you have something else going on besides reasoning, something eating at you that makes you strike out this way. I could respond to an argument, but I can’t peer into your soul and respond… Read more »