The Gospel of John: A Processional Hymn

Through the Word all was made that is;
All creation’s splendor his.
Nothing without the Word existed,
Only in him the world persisted.
He was before all things with God,
Everlasting, changing not.

In him was life, the light of men;
Dark can never enter him.
In the dark shines the light engendered,
Radiance of the Father’s splendor.
Darkness can never overcome
Light from light, God’s only Son.

The Word was made flesh and dwelt on earth,
Of a virgin taking birth.
We have beheld his glory gleaming,
Radiance from the Father streaming,
Glory as of the Son most high,
God from God and light from light.

The Annunciation falling on Good Friday is no coincidence at all. END_OF_DOCUMENT_TOKEN_TO_BE_REPLACED

When I pointed out this morning that our baby Matthew would have been killed had he been in those villages near Bethlehem, my fifteen-year-old daughter Bernadette was thoughtful.  This evening, she gave me a set of poems she had written, and I want to share them here:

Have you ever seen a baby’s smile light up the room?
Seen sheer happiness for no more reason than a laugh?
Have you ever heard a baby’s song without a tune?
Or, playful, fought him for your bread, at least a half?

END_OF_DOCUMENT_TOKEN_TO_BE_REPLACED

Four groups made up the dramatis personae of the medieval cathedral: aside from the bishop himself, there were priests, deacons, subdeacons, and members of the choir. During the Christmas season, each group claimed its day: deacons of course celebrated specially on the feast of St. Stephen, priests celebrated on the feast of St. John, the boys of the choir had their day of glory on the feast of the Holy Innocents, and the subdeacons claimed the feast of the circumcision. The choir boys’ special day led to one of the most beautiful and yet surprising customs of the middle ages, the boy bishop.

This Advent I treated myself to Neil Mackenzie’s delightful book, The Medieval Boy Bishop. Mackenzie offers a panoramic view, explaining from source texts how the “boy bishop” custom operated in England and in countries all across Europe. The essential idea was expressed by an official at St. Paul’s Cathedral in 1263:

END_OF_DOCUMENT_TOKEN_TO_BE_REPLACED

The Breviary begins today with this invitatory: “Come let us worship the newborn Christ, who has given the glorious crown to St. Stephen.” In the book of Acts, where we read about Stephen’s martyrdom, nothing suggests a connection to the newborn Christ in particular, but the fact that his feast day has been right after Christmas since the liturgical year first took shape led to the tradition that the three days after Christmas bring three “companions of Christ” around the crib to adore the infant God.

The three companions, according to a medieval commentary, represent the three kinds of martyrs. First we have Stephen, who was willing to die for Christ and was in fact killed; tomorrow we have St. John, who was willing to die for Christ but was not in fact killed; and then we have the Holy Innocents, who were in fact killed for Christ but were too young to be willing. Today’s invitatory connects the newborn Christ to the first kind of martyr. Tomorrow’s invitatory turns to the default invitatory used for every Apostle, but the invitatory for the Holy Innocents sounds like today’s: “Come, let us worship the newborn Christ, who crowns with joy these children who died for him.”

END_OF_DOCUMENT_TOKEN_TO_BE_REPLACED

The tomb of St. Nicholas of Myra had long been a popular pilgrimage destination, but when sailors from Bari, Italy stole his relics from the Turkish-occupied town, devotion to St. Nicholas took off in the west.  Given the stories of his generosity and his love for children, it was natural that St. Nicholas should surround himself with the aura and the legends of Father Christmas, a lingering memory of Norse legend.  Within a couple of hundred years, the Feast of St. Nicholas was a landmark in the Advent season, hailing the election of the Boy Bishop (more on this character later) and the exchange of Christmas gifts.

Since my childhood was not spent in the Church, the first time I encountered any celebration of St. Nicholas’ Day was when I visited my soon-to-be wife’s family.  Later, when we lived in Gaming, Austria, we experienced the intensity of medieval devotion to St. Nicholas.  A friend who was a boy in Gaming around that time has posted his vivid memory of Nicholas and the Krampus here–you can see what I mean by “intense”!  Our first daughter was a baby at the time, and we realized that we just had to stay inside.  Krampus was too much.

Once back in the states, we brought new fervor to our celebration of St. Nicholas’ Day, although we haven’t opted to have a demon chase our children with whips.  Instead, we bought a giant cookie mold of the bishop Nicholas from houseonthehill.net; since the cookies need time to age, we make them a couple of weeks ahead of time.  The night of December 5, the kids make gingerbread cookies for their stockings.

In the morning, the stockings are hung by the fire place–the 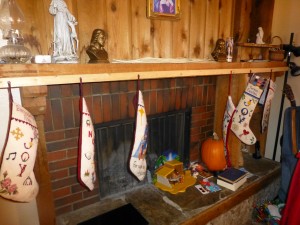 beautiful, hand-crafted stockings my mother has lovingly made for each child–and in the stockings are cookies, some chocolate coins to remember the story of St. Nicholas’ gifts, and a small gift.  Typically, the stockings buy time for my wife and me to get up slowly and make breakfast at a more leisurely pace.

In the afternoon, we’ll make hot cocoa and eat the giant Nicholas cookies.  I like to give at least one giant cookie away, if I can.  Because I’m into medieval customs these days, our background music will be an album of medieval folks songs for the feast of St. Nicholas.

Last year I had the honor of reporting that my poem “David’s Town,” set to music by Peter Kwasniewski, was performed by an ensemble in Scotland.  This year I am happy to announce that “David’s Town” has been included on Wyoming Catholic College’s new Advent CD.  It is a special song, because it is the only hymn to my knowledge that devotes one stanza to each of the “three comings” celebrated in Advent:  the first coming in humility, the second coming in mystery, and the third coming in glory.

The new CD is beautifully done, recorded by a special student ensemble led by Kwasniewski.  You can find lyrics, information, and a way to purchase the CD here.  Take a look!  We’re doing an important work at WCC, and every CD purchase helps us keep the lights on both literally and figuratively.

Meanwhile, to give you a sense for the quality both of the performance and the recording, here is the “David’s Town” track:

So I set out to remedy that lack in the English-speaking world’s repertoire, or at least in my own musical collection.  I wrote one verse of the projected hymn that year.  The following year I added a second verse.  Finally, this year I wrote the third and final verse of our new hymn for today’s feast, “For the Holy Family”.  Click here to see words and music, and below you’ll find a recording by the aspiring-to-be-holy family here in Lander.