In the Gospel of John there is a scene when the disciples are fishing:

Just as day was breaking, Jesus stood on the beach; yet the disciples did not know that it was Jesus.  Jesus said to them, “Children, have you any fish?” They answered him, “No.”  He said to them, “Cast the net on the right side of the boat, and you will find some.”  So they cast it, and now they were not able to haul it in, for the quantity of fish.  That disciple whom Jesus loved said to Peter, “It is the Lord!”

All the disciples heard the same words, “Cast the net…and you will find some.”  But these were simply words to them; they did not know that these were words of the very Word of God.  But there came a moment of recognition:  “It is the Lord!”  And at that moment, the words of this figure on the shore were accepted, “not as the words of men, but as they truly are, the word of God at work among you who believe” (1Thess 2:13).

In my past reading of St. Thomas, it has seemed to me that he deals more with the second moment of truth than with the first.  When he speaks of “believing,” he is thinking of someone who is already in dialogue with Truth-who-speaks.  But in my conversations with people today, it seems that people most often think of “believing” as that moment when the varied and more or less confused words of men, the tortured witness of history, and the pressures of life suddenly come into focus around a single Voice.  This difference in emphasis, it seems to me, plays out in terms of a particular emphasis in contemporary theology—but more on that idea later.

Long before he wrote the Summa, St. Thomas treated of the question “whether the first truth is the object of faith” in his commentary on Peter Lombard’s Sentences, (Bk. 3, Distinction 24, Question 3, Article 1).  Each of the objections and the sed contra of his Summa article is parallel in content to an objection or sed contra in the Sentences commentary.  The parallels are not so verbally close as to suggest that St. Thomas had the text of his Sentences commentary in front of him while he wrote the Summa article, but strong enough to argue that he was somewhat consistent over time in how he dealt with the question.

In my last post, I pointed out that St. Thomas illustrates the formal/material object distinction with geometry when he is talking about faith and with sight when he is talking about Sacred Doctrine.  As I noted, this is surprising:  since geometry is a science, one would expect him to use that as an example for Sacred Doctrine, which he also argues is a science; and since Scripture uses sight as a metaphor for faith, one would expect the sight metaphor to come up in connection with faith.

The unexpected switch is all the more interesting because St. Thomas uses the sight example to illustrate the formal/material object distinction when he deals with faith in the Sentences commentary.  In other words, in his earlier work he did what one would expect; in his later work, despite using some of the same objections and the same quotation in the sed contra, he changed the example he uses from sight to geometry.  I wish I knew what he had in mind!

As I walk through the text of ST II-II.1.1, I will use the comparison chart from last post to track ST I.1.3 as well.  I’ll begin with the Respondeo and then return to the objections as I look at the replies.

The first thing to notice is how St. Thomas defines his topic.  In the first line of the Respondeo, he says that faith is a habitus, a stable disposition; out of the tremendous range of realities one might call a habitus, he identifies faith as a cognitive habitus, that is, a stable disposition to know something.  Then he notes that the way to define a cognitive habitus is to specify what it disposes one to know, that is, the “object.”  The rest of the Respondeo is devoted to that project.

In geometry, the way of knowing is through definitions.  If I know what a triangle is, and by knowing what a triangle is I come to know the Pythagorean theorem, that is geometry:  the definition of a triangle is what St. Thomas calls the media demonstrationis, and it in the light of the definition that I know the conclusion.  I could of course come to know the Pythagorean theorem by measuring lots and lots of triangles until I was convinced through experience that they always turn out this particular way, but in that case I would not have the cognitive habitus of geometry.  I would know the same material object—the Pythagorean theorem—but the formal object would be different.  Similarly one can know a lot of things by reason or experiment that are also revealed in Scripture, but the formal object—the defining difference of the cognitive habitus at work—is different in the two cases.

At this point, St. Thomas gets down to business by specifying exactly what is the formal object of faith.  But I’ll take up that up in the next post.

In St. Thomas’s treatment of faith in the Secunda secundae of the Summa theologiae, the first question he takes up is “Whether the object of faith is the first truth.”  Before I walk through the text of the article, I want to point out that this article is almost point by point parallel to Question 1 Article 3 of the Prima pars, which asks “whether Sacred Doctrine is one science.”  Article 7 of that same question, “Whether God is the subject of Sacred Doctrine,” follows the exact same set of ideas.  These parallels seem to support my initial intuition that a careful account of faith will lead directly to a careful account of theology:

I am going to use the above table as the basis for the next several blog posts.  If you intend to follow this series of posts and you need me to switch to using an English translation of Aquinas, please let me know.  I don’t habitually look at English texts or translate Thomas’s Latin, so I won’t make the effort if no one out there needs it.

What do May snowstorms bring? 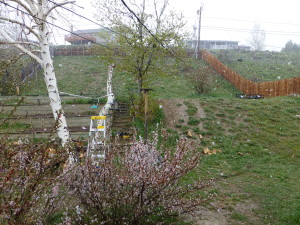 Over the past two years, I have grown increasingly dissatisfied with my own inability to articulate clearly what theology is.  In conversation with colleagues, I find that I give various accounts depending on the context, and that I have never sat down to the hard labor of unifying all my thoughts into a single, coherent view.  For the sake of my friends who have been or intend to be my partners in exploring the question, I would like to keep notes on this blog along the way to finding clarity.

I enter the question with two basic intuitions.  First, I think that theology is what happens when faith gets to follow its inclinations.  That is to say, fides quarens intellectum—“faith seeking understanding”—is a pretty good nominal definition of theology, and corresponds to what faith wants:  faith is by its nature not at rest but seeking, and by the very nature of faith the object it seeks is understanding.  So the key to arriving at a careful account of theology is to begin with a careful account of faith.

Because I have not had an occasion to read it before, I would like to begin by walking through St. Thomas Aquinas’s account of faith in the Secunda secundae of the Summa theologiae.  But that will be its own post.