My three-year-old nephew approached me today with this request:  “I want you to do the thing I don’t like you to do.”

Turned out to be a tummy tickle, which was promptly delivered.

Yesterday I was looking at a model ship on Amazon.com, thinking about a possible birthday gift for David the ten-year-old (who will be eleven this summer).  Some stats on the beauty I was considering:

– Requires paint and glue (not included)

That all seems pretty intense, I know, but here’s the kicker:

Many, many years ago, a fellow in my college dormitory by the name of Stan Grove tried to persuade me to like the music of Arvo Part.

[Brief digression:  It is customary to put an umlaut, which is like a sideways colon, over the letter “a” in Part, because this is how his name is spelled in his own language.  I do not think it necessary in English, since I can write Jackie Chan without drawing whatever Chinese figure stands for Jackie’s last name.  The “a”-with-umlaut is not an English character.  And anyway, I don’t know how to make my blogging software do it.]

Stan and his roommate, Owen Sweeney, would gang up on me and my roommate, Joseph Susanka, to introduce us to more daring forms of tonal (or atonal!) beauty.  At the time we were having none of it.

But now Stan Grove is a teacher on the faculty at Wyoming Catholic College, Owen Sweeney is the admissions director, and Joseph Susanka works in the fundraising branch, so it’s like a big reunion.  And today Stan brought up the subject of Arvo Part again.

But I think I’ll leave the Mongolian chant alone.  That was just strange.

Long interested in the history of punctuation, I was fascinated as a boy by Victor Borge’s idea of phonetic punctuation.  As I became more aware of the world of computers, I learned about the emoticon, a strange new development beyond exclamation points and question marks.

And yesterday, for the first time, I was introduced to the phonetic emoticon.

Teresa the five-year-old and Tina the three-year-old have each begun adding a tongue click sound to the end of happy sentences.  Teresa:  “I’m doing three pages of math today [click]!”  Tina:  “Can you give me some raisins? [click]”  Really, really happy paragraphs will have as many as three or four clicks.

It seems to function more or less as a vocal smiley face–always accompanied by a visual smiley face, of course.  Now that I think of it, children have for many ages had the vocal equivalent of 🙁 and :-O.

Tina the three-year-old:  “Teresa and me are paying a dame!”

My reaction:  Paying her for what?

[English translation:  “Teresa and I are playing a game!”]

As Jacinta brushed Tina-the-three-year-old’s teeth tonight, Tina explained that “I have spiders in my mouth.”

This matter-of-fact pronouncement was startling and indeed alarming–at her age, she might well have done the unthinkable–until her sister provided the backstory.  Teresa the five-year-old had explained to Tina that we have to brush our teeth to get rid of the bugs in our mouth.

And for Tina, bugs = spiders. 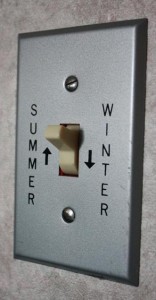 I am sooo ready to hit the switch!

As I reviewed Latin with the kids tonight, the following sentence sprang into my head and made me grin:

Regina the seven-year-old lamented, “I’m bored!”  Her mother responded, without a lot of sympathy, “Then clean your room.”

Some time and many sighs later, Regina slouched in the living room, staring morosely out the window.  “Did you finish your room?” her mother asked.  Regina nodded.  “You still look bored,” her mother commented.