Tina the three-year-old is a dramatic little cutsie.  For a while recently when she did not get her way she would flop on the floor and cry, “Nobody likes me!”  This morning she tried a variation:  after the customary floor-flop, she sobbed, “I don’t like anyone!”

Regina the seven-year-old, who is flirting with the age of reason, tried reasoning through the problem:  “Don’t you like Tina?”

Trapped!  “Mmmmmm,” Tina responded, unsure how to break through the objection, but unwilling to admit defeat.  Then she changed the subject.

When the new Pope was announced, I was watching the live feed in a room of interested spectators, including the bishop of the Diocese of Cheyenne.  I caught the Cardinal’s voice saying, something about Bergoglio qui sibi nomen imposuit Franciscum (“who has given himself the name of Francis”).

Over the next minute or two, I found myself explaining to others what had been said.  It was neat at that moment to have the habit of understanding spoken Latin:  I heard the very words and grasped them.

Jacinta pressed the kids today with a parental pop-quiz:  Who was the third child of Adam and Eve?  The boys pondered, but Bernadette was confident:  “They had two boys and a girl,” she said, “I remember that.”

This kid could answer subtle questions about the Trinity, but it looks like time to review Genesis.

The very morning that Cardinal Bergoglio was to be elected pope, he read this in the Office of Readings:

“Why do you treat your servant so badly,” Moses asked the Lord.  “Why are you so displeased with me that you burden me with all this people?  Was it I who conceived all this people? or was it I who gave them birth, that you tell me to carry them at my bosom, like a foster father carrying an infant, to the land you have promised under oath to their fathers?  …I cannot carry all this people by myself, for they are too heavy for me.  If this is the way you will deal with me, then please do me the favor of killing me at once, so that I need no longer face this distress.”

Seemed to me an ironic juxtaposition.

[The following post requires some Latin to understand.  If you are a regular reader of this blog and you want an English rendering, please leave a comment.]

When the white smoke when up to announce the election of a new Pope last Wednesday, I was in a meeting.  I wrote a note to Scott Olsson next to me:  Habemus papam!

I scribbled a moment and passed the note back:  Nescio.

Scott added the Roman numeral “I” and passed the paper back:  Nescio I.

Which didn’t turn out to be the name, but it was a great joke.

As the whole world knows, the college of Cardinals is gathered in Rome to choose the Church’s next Pope, which could happen as early as tomorrow.

As only a few people in the world know, Wyoming Catholic College’s Board of Directors is gathered in Denver to choose the College’s next president, which could also happen as early as tomorrow.

At a dinner tonight, I expressed my pleasure at the thought that both events could take place on the same day.  “Will there be white smoke when the new president is chosen?,” someone asked humorously.

“Oh yes,” the current president responded at once, flourishing a pack of cigarettes:  “White enough!”

I wrote a while ago about how Scott Olsson and I spun out on the highway going to Denver.  As our next trip approached, Scott sent a note to ask what time I wanted to depart.

Well, I wrote back, I want to go to Mass and have doughnuts afterward for my son’s birthday, but we could leave after that.

“Good thinking,” Scott shot back, “Let’s have our doughnuts this time before we get on the road.”

Introducing an all-new category, the Cool Thing of Today.  I don’t promise to have one every day, but cool things come almost as fast as funny things around here.

Today’s CTT was this:  While in the front yard after dusk I heard an owl hoot.  Glancing up, I spotted what could be the owl in the top of a tree across the street, so I grabbed the birding binoculars Jacinta gave me for Christmas.  Sure enough, it was the owl.  He turned to look right at me and hooted again, right into the binocs!

Today we celebrated Isaiah’s ninth birthday.  He is our mischievous one; I joke with Jacinta about starting a bank account for Isaiah to save up for bail money.  This meant he was the perfect kid for the tricksy, self-relighting birthday candles! 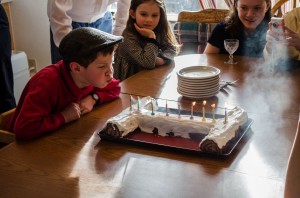 He actually had them all out at one moment, so even though they re-lit a moment later we gave him credit for blowing out his candles.  He thought the trick candles were a lot of fun and very funny, and gave us that unique Isaiah-chortle.

Incidentally, you can see that the cake is shaped like the letter I.  “That’s for ‘Ichabod,'” I explained to him.  [Chortle!]