As I mentioned before, my sister Sarah sent chocolates as a present to Tina the three-year-old, but we decided to give the chocolates out as rewards for good potty behavior.  This has kept the name “Sarah” current in the household, for sure.

Again, as much as I appreciate the continual reminder about Aunt Sarah, I regret tying her good name to such a base reality.  That said, Tina hasn’t had a single accident since the chocolates arrived–so I’m afraid we’re sticking with it! 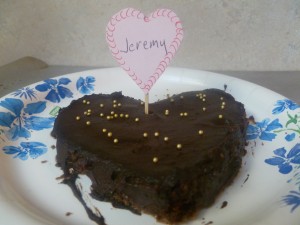 Teresa the five-year-old: “This one must be yours, because it says, ‘Papa’!”

Early this afternoon, I put down my laptop and stumbled wearily toward the kitchen for a drink of water.  Tina the three-year-old appeared around the corner, wearing only underpants and a silk scarf tied around her neck; in her hand she brandished a fly-swatter held with the hand pointing out.

“I am Zorro!” she announced.

“Hi Zorro,” I replied, and stumbled on.  This has been a theme lately.  My parents gave the kids a complete DVD collection of Disney’s “Zorro” series, and they watch a couple of episodes every weekend.  Tina has taken to it more than any of them.  Although usually wearing more than underpants, Tina has adopted the reversed fly-swatter as her official rapier, and she charges through the house shouting, “Ne-e-e-i-gh!”  (That’s Zorro’s horse, in case you can’t tell.)

A few days ago, she bounced into the kitchen, announcing to Jacinta, “I am Zorro!”  “Go use the potty, Zorro,” Jacinta responded.

Um.  Good point.  That’s true.  Not in the Disney version, he doesn’t.  Jacinta recovered quickly:  “Yes, but Zorro keeps his pants dry!”  It took a few minutes of back and forth (“He doesn’t use the potty!” “But he keeps his pants dry!”) before Tina had to concede the justice of the argument and marched off to her seat.  While on the potty, she insisted that she was Tina (you can probably guess the premise behind that).

But as she arose from the seat of ignominy, clasping in her right hand her fly-swatting rapier of daring-do, and raising her face once more, she proclaimed:  “I am…Tina-Zorro!”

Ash Wednesday is always hard, but today I had to feel sympathy for someone else:  we had a candidate for the college presidency here for an interview this afternoon.  As I introduced him to the faculty, I mentioned my own experience with hiring processes.

When I applied at Ave Maria University, they kept me up late, gave me a lot of wine, and then began asking questions.  That was one approach to getting a man’s guard down.

Then when I applied here at WCC, I interviewed on Ash Wednesday.  That afternoon, when I was hungry and weak, the president and the dean got me alone in an office and grilled me.  That’s another approach, I suppose–but not half so nice as the wine!

[Disclaimer: I don’t really think that these institutions intentionally practiced psychological warfare on me.  They did it by accident.]

[Epilogue to the above:  I got the job both times.  So apparently I would say the right thing even under the influence of a truth serum.]

So I left for work yesterday and headed north toward Main Street.  A couple of blocks from my house, as I passed 7th and Cascade, I saw a dog–a big dog–chasing a car.  The car pulled onto 7th ahead of me, and the dog pulled onto 7th behind me.  The three of us continued toward Main.

Half a mile later, the car and I both pulled right onto Main.  The dog pulled onto Main behind us and occupied the righthand lane, keeping pace with traffic.  Three blocks later, the car made a sudden left, and the dog continued to follow me for another block or so before stopping to sniff around and look disappointed.

Wow, I thought to myself.  I didn’t know they still made dogs like that.

Tina: “There’s a popsicle on the bird fever!”

Through the shadows of a winter evening, Isaiah the eight-year-old crept down the hallway.  He flashed past the kitchen door and ooched, ninja-like, around through the dining room.  Sneakily sneaking, he eased up behind his father and– “HAAAA!” he cried, “Good night!”

“Oh yes, I do,” replied his father, taking off his glasses and gesturing:  “One, two, three, four.”  While Isaiah was still objecting, his father added, “And I have ears on both sides of my head, too!”

“You DO NOT!” shouted Isaiah, laughing out loud.

So I showed him.

I learned today that one of the students in WCC’s first class showed up not knowing that this was a new College.  “So, where are the buildings–and the other students?”  The College website had stock photos of smiling students on its website, and this incoming freshman had assumed that the smiling people were real students.

It all ended happily:  the student graduated and loves the education she received.  But I can only imagine it was a big shock that first day!

Our eldest, Bernadette the twelve-year-old, has reached the stage of truly nurturing and shepherding her youngest siblings.  She cares for them, and she bosses them around, and in general plays the role of a second mother.

Tonight witnessed the annual Quis Quid game at WCC.  It is an all-school quiz game for which the students are divided into Poets, Philosophers, and Cowboys to compete for the Throne of Wisdom.  Teachers judge the teams’ answers to quiz questions, and they are horribly unfair judges:  even if they have no idea of the correct answer themselves, they judge yay or nay based on bribes, whim, or amusement.

When I interviewed here at the College, my first night on campus fell during the Quis Quid game.  They pressed me into service as a judge, and I remember vividly when a “question” under the category of “body” was posed to a student team:  “Levitate.”  That simple, just a single-word imperative.  And the team that “levitated” (however they chose to interpret the word) best in the judges’ (horribly unfair) opinion won the round.

I left Quis Quid early tonight, as the Poets and the Cowboys were competing for best answer to the question, “What is the theological significance of the fact that an equilateral triangle is constructed using two circles?”

A candidate for the presidency of WCC was in attendance tonight.  It’s his first night on campus; I feel for him, but at least he wasn’t pressed into service as a judge.  As I slid into a seat behind him he turned to introduce himself.  “Nice to meet you,” I said–then glancing up at the students, dressed in outlandish costumes, one with fake tatoos up his naked arms (tell me they’re fake!), another with a huge, puffy wig waving raucously, others going “Greek” in bedsheets–“and, um, welcome to WCC.”